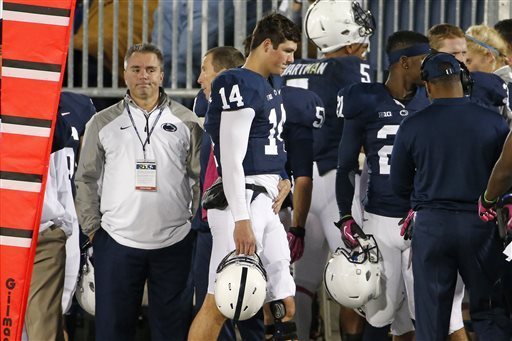 Penn State made a frantic comeback bid in an eventual 31-24, double-overtime loss to No. 13 Ohio State last Saturday, igniting a “White Out” crowd and playing arguably its best game of the season. The Nittany Lions’ defense pitched a second-half shutout while the offense scratched and clawed for 10 points to tie the game in the fourth quarter.

The game was charged with emotion and, of course, featured two high-profile recruiting blunders that led directly to 10 first-half points for the Buckeyes. Coach James Franklin said after the game it would not be “appropriate” to comment on the botched calls and added that, hard-fought or not, his Nittany Lions wouldn’t settle for “moral victories.”

So, the loss goes in the books as Penn State’s third consecutive setback after a 4-0 start. Next up is a Maryland team that has had up-and-down moments in its Big Ten debut, with good wins over Indiana and Iowa and blowout losses to Ohio State and Wisconsin. The Terrapins began the week as 2.5-point underdogs for their road trip to Beaver Stadium.

Penn State’s defense again figures to be the most dominant unit on the field and has a sizable advantage in the trenches as the nation’s No. 3 run defense. Maryland ranks fifth in the Big Ten in scoring offense (31.6 ppg), ninth in total offense (373.9), seventh in passing (236.4 ypg) and 11th in rushing (137.5 ypg).

But could a hangover from last week’s loss to Ohio State linger into the first quarter against Maryland? And can the Nittany Lions’ offense again take its cue from the defense and win a game that PennLive’s Bob Flounders says could be inevitably “ugly.”

Flounders, Andrew P. Shay and Ross Tucker debated those points in a weekly preview segment for the Keystone Sports Network. Check out audio from the show below and get more podcasts at KeystoneSportsNetwork.com and on Twitter at @KSNSportsNet.