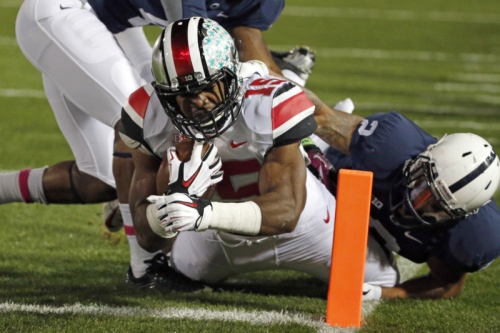 Penn State’s upset bid fell short in a 31-24 double-overtime loss to No. 13 Ohio State in a game that was marked by two officiating blunders and a dominant second-half performance by the Nittany Lions defense. But coach James Franklin said there were no “moral victories” to be had, instead chalking up the narrow loss as simply Penn State’s third straight defeat.

The primetime game in front of a capacity “White Out” crowd was a tale of three games, PennLive reporter Bob Flounders said on this week’s Keystone Sports Network week in review. The Nittany Lions were on their heels in surrendering a 17-0 halftime lead, made impressive halftime adjustments and were beaten by Ohio State’s J.T. Barrett in overtime.

Penn State’s upset bid got off to an ominous start on its opening drive, when a Christian Hackenberg pass that clearly hit the turf was called an interception, then upheld because of a technical malfunction in the replay video feed. The Buckeyes found the end zone seven plays later on a 10-yard run by Ezekiel Elliott.

The Buckeyes also benefited from a botched delay of game call, in which officials failed to notice the game clock on Sean Nuernberger’s 49-yard field goal early in the second quarter. Two missed calls, 10 points, and the rout was on. Or so it seemed.

Penn State played lockdown defense in the second half and turned the game’s momentum on a 40-yard interception return for a touchdown by Anthony Zettel. The Nittany Lions added their first offensive touchdown on an impressive one-handed grab by Saeed Blacknall and tied the game on a 31-yard field goal by Sam Ficken.

Ohio State pulled together in overtime on two touchdown runs by Barrett to escape with a 31-24 win. On this week’s Keystone Sports Network segment, PennLive beat reporter Bob Flounders said the Nittany Lions deserved credit for their performance and Andrew P. Shay thought we learned more about Penn State than we did about Ohio State.

Check out full audio from the show below and get plenty more on KeystoneSportsNetwork.com and @KSNSportsNet on Twitter.