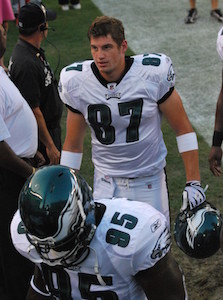 The Philadelphia Eagles were stunned on the road by the Arizona Cardinals in a 24-20 loss on Sunday, a late 75-yard touchdown pass from Carson Palmer to John Brown ultimately making the difference. Big plays and turnovers were again issues for Philadelphia, which held sizable advantages in total yardage (521), plays (88) and first downs (27).

Quarterback Nick Foles threw two more interceptions, bringing his season total to nine — already seven more than he threw in 13 games (10 starts) last season. The NFL leader in passer rating a year ago, Foles has seen a dip in his yards per attempt (6.8), rating (80.7) and completion percentage (59.2 percent) in 2014.

Two key areas of trouble have had an impact on the overall performance of Chip Kelly’s offense, but Foles’ play in particular. Philadelphia’s offensive line is still missing starters Jason Kelce and Evan Mathis, which has stifled the run game and put more pressure on Foles. The third-year quarterback has struggled with mistakes on off-balanced and back-foot throws.

Defensively, the Eagles have shown a knack for allowing and creating big plays. The boom-or-bust factor was far more “bust” in the loss to Arizona, allowing long catch-and-run touchdowns to Brown and Larry Fitzgerald. The play of Kelly’s defensive backs will continue to be a storyline worth watching.

A difficult late-season schedule will test the Eagles’ strengths and weaknesses with five matchups against teams with .500 or better records in their final nine games. That includes a Week 9 road matchup with a feisty Houston Texans team that runs the football and pressures quarterbacks as well as any team in the NFL.

Keystone Sports Network analyst Ross Tucker’s position is that one of Foles’ multi-turnover efforts in the playoffs can keep the Eagles from reaching their lofty team goals. Former NFL running back Jon Ritchie predictably believes a rededication to the Eagles’ once-dominant run game can solve their offensive woes.

Check out those insights and plenty more from Tucker (@RossTuckerNFL) and Ritchie (@PortaJonRitchie) in this week’s Eagles-Cardinals breakdown. Follow both on Twitter for more analysis and stay tuned to KeystoneSportsNetwork.com and follow @KSNSportsNet for more podcasts and stories on the Eagles, Pittsburgh Steelers, Penn State and more.